Yesterday, as I sat at my desk in the artist’s studio (okay, at the dining table in my flat) I heard Roger barking, and I knew it was about 3:30pm.

Roger lives in a garden of herb and flower beds separated by low hedges with a lemon tree in one corner and a bay tree in the other and several enormous eucalypts in between. Our flat, which is on the third floor, overlooks the garden. 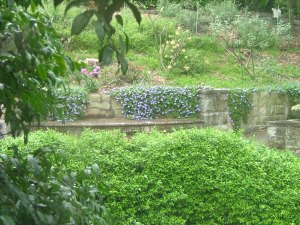 There is a tall eucalypt that stands right next to the window, partly obscuring Roger’s garden, and adding to its air of mystery. The tree is usually home to a host of bright yellow eyed Pied Currawongs. They like to dive like paper planes from the branches, and emit guttural warbles and long bell like swivels at sunset, presumably to indicate to their friends that they are now at home and ready to party. (Similar to some of our neighbours, as they open their first can of beer for the evening. Personally I prefer the pop of a cork.) But recently the Currawongs have headed off over the hill for the summer and the tree has become inhabited by a pair of Common Mynah birds – hatchlings actually.

As you can probably tell by now, I waste a lot of time looking out the window, watching and listening to the variety of furred and feathered animal life that surrounds me. And I particularly love keeping track of Roger’s escapades.

There is a vegetable patch at the north end of Roger’s garden and a carved stone seat at the south end, and sometimes when Roger’s masters are working in the vegetable patch or sitting sipping white wine on the stone seat, Roger is allowed to dig deep under the hedges, searching for rats’ nests, or chasing the dragon flies and bees that buzz over the herb beds.

But the most exciting time for Roger seems to be mid afternoon, around 3:30pm. That’s when the path next to the garden wall comes alive with the sound of children running home from school.

Roger gives a low growl to alert them of his presence.
And then like a little out of tune orchestra, the children begin to chant. “ROGER!!!!” “ROGER!!!!”
That’s when Roger leaps at the wall, his Red Setter fur flying, his bark strong and loud.
And the children’s voices rise to a crescendo.
“ROGER! ROGER! ROGER!”
And then from the vegetable patch, “Roger! Stop that now!”
And Roger transforms from lion rampant, back to canine passant; his powerful bark turning into an embarrassed growl, as he ambles away to once again chase the bees. Quietly.

And I too turn back to chasing words.

While watching Roger, my hands had paused over the keyboard. On the edge of my left hand I felt a light touch, almost a nibble. Was something nibbling my hand!?! I looked down. A good size gecko stared sideways at me. The wild life was no longer just outside.

“Excuse me, what kind of creature are you?” It seemed to ask. “And would you please point out the nearest source of food? This place is a desert!”

Daniela is a writer, theatre producer and civic educator. She has had short stories and poetry published in: 'Prayers of a Secular World', Inkerman & Blunt; 'Blue Crow Magazine', Blue Crow Press; 'Knitting and other stories', Margaret River Press and Radio National’s '360 documentaries'. Her debut play, 'Talc', was produced in 2010. Her short play, 'Sicilian Biscotti', was produced for the launch of “Women Power and Culture” at New Theatre in 2011 and shortlisted for the Lane Cove Literary Award in 2015. Her second full length play, 'Friday', was produced by SITCO at the Old Fitzroy Theatre in 2013. 'The Poor Kitchen' was produced in 2016 as part of the Old 505 Theatre’s Fresh Works Season and was published by the Australian Script Centre in 2017 (https://australianplays.org/script/ASC-1836). It was re-staged by Patina Productions at Limelight on Oxford in 2019. She co-wrote 'Shut Up And Drive' with Paul Gilchrist and it was produced at KXT in 2016. 'Seed Bomb' was produced at Old 505 Theatre as part of the FreshWorks Season in 2019 and has been published by the Australian Script Centre (https://australianplays.org/script/ASC-2166). She co-wrote 'Softly Surely' with Paul Gilchrist and it was produced at Flight Path Theatre in 2022. She is the co-founder of indie theatre company subtlenuance (www.subtlenuance.com) Her published short stories can be read via the Short Stories tab on this blog.
View all posts by sagesomethymes →
This entry was posted in The Animal Kingdom and tagged bees, dogs, dragon flies, garden, red setter, vegetable patch. Bookmark the permalink.