Everybody Matters by Mary Robinson; A Memoir

Posted on October 25, 2014 by sagesomethymes

Someone once famously said “democracy is a verb, not a noun.” For a long time I didn’t understand what this meant. Then I read Mary Robinson’s memoir.

Mary Robinson is someone that does. And in the doing she has made the world a better place, and inspired and empowered others to do the same. 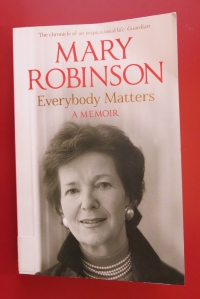 As a lecturer, legislator, President of Ireland and United Nations High Commissioner for Human Rights, she tackled seemingly intractable problems, advocated for the world’s poorest, and spoke truth to power. She visited those ravaged by war; and brought the calm light of hope to some of the world’s darkest places.

Her memoir is the kind of read that makes you grateful there are such amazing people in the world. The title of her book says it all. She has lived her life fiercely defending the belief that everybody matters, and has fought courageously and compassionately for the dignity of every human in need.

This book makes you want to put on your best suit, get a good haircut, and get elected to high office. But then there would be so much to do! This is what stops most of us in our tracks. But probably only after buying the suit and getting the haircut.

Daniela is a writer, theatre producer and civic educator. She has had poetry and short stories published in 'Prayers of a Secular World', Inkerman & Blunt; 'Blue Crow Magazine', Blue Crow Press; 'Knitting and other stories', Margaret River Press and Radio National’s '360 documentaries'. Her debut play, 'Talc', was produced in 2010. Her short play, 'Sicilian Biscotti', was produced for the launch of “Women Power and Culture” at New Theatre in 2011 and shortlisted for the Lane Cove Literary Award in 2015. Her second full length play, 'Friday', was produced by SITCO at the Old Fitzroy Theatre in 2013. 'The Poor Kitchen' was produced in 2016 as part of the Old 505 Theatre’s Fresh Works Season and was published by the Australian Script Centre in 2017 (https://australianplays.org/script/ASC-1836). It was re-staged by Patina Productions at Limelight on Oxford in 2019. She co-wrote 'Shut Up And Drive' with Paul Gilchrist and it was produced at KXT in 2016. 'Seed Bomb' was produced at Old 505 Theatre as part of the FreshWorks Season in 2019 and has been published by the Australian Script Centre (https://australianplays.org/script/ASC-2166). She is the co-founder of indie theatre company subtlenuance (www.subtlenuance.com) Her published short stories can be read via the Short Stories tab on this blog.
View all posts by sagesomethymes →
This entry was posted in Book Review and tagged A Memoir, Everybody Matters, Mary Robinson, President of Ireland, United Nations High Commissioner for Human Rights. Bookmark the permalink.

1 Response to Everybody Matters by Mary Robinson; A Memoir