Posted on September 20, 2018 by sagesomethymes

“What’s there not to love?” Paul, my partner, asks. “Two days and three nights surrounded by the ocean; cocktails delivered to your deck chair, sublime sunsets and dancing the night away.”

Then he tells me the price.

Allowing myself to be swayed, I say, “Guess there aren’t that many icebergs in the Pacific Ocean.”

And that’s how I find myself on a cruise ship; heading out of Sydney Harbour on a Friday afternoon with no destination but the sea itself.

I’m relying on the 9 bars, 7 restaurants, 6 Jacuzzis, 3 pools, 2 theatres, 1 casino and a flying fox to keep my mind off the possibility of this 260 metre, 77 000 tonne liner sinking to the bottom of the ocean floor. But soon I relax and begin to enjoy life on board ship. A Strawberry Daiquiri while watching the sunset at the Ocean Bar. A Pina Colada as we while away the dusk listening to Jazz in the Quarterdeck Lounge.  And a Semillon, with dinner at the Waterfront Grill. Despite myself, I’m getting used to this more quickly than I thought possible. Later that night in my cabin, gently rocked by the almost imperceptible sway of the ship, I sleep like an infant in a cradle.

The next morning, after several coffees and a buffet breakfast, we walk the promenade deck. I’m mesmerised by the deep blue of the ocean. I could circle this ship all day. But alas it’s time for morning tea. On the lido deck some of our fellow passengers are already quaffing their liquid lunches. I limit myself to the sweets bar and choose a lounge chair. There’s very little swell. We might survive this after all. Soothed by a slice of baked lemon cheesecake, and the shimmer of sunlight on the sea, I doze off.

Suddenly I’m woken by an announcement from the Bridge.

“Good Afternoon. This is your Captain speaking.”

I bolt upright. It’s the call to abandon ship and man the life rafts! Thank goodness I paid close attention at the safety muster yesterday. And I popped my life jacket under the deck chair earlier, just in case.

“Apologies for the interruption,” he continues. “There are whales straight ahead of us, with a couple of calves. We’ll go about. So stand at Starboard and enjoy the view.” Sheepishly I remove the life jacket and move to the railing. I’m glad Paul’s playing shuffleboard on the sports deck and hasn’t witnessed my panic.

Then I see them: six humpback whales, swimming in pairs, two of them smaller than the others. They must be the babies.  It feels as if the ship has stopped. Around me, people have gathered, lining the deck, staring in silent wonder as the whales roll and play, spraying watery liquid from their spouts. We drift, quite close, alongside them.

Like us, these magnificent creatures are travelling north, but unlike us, they’re fasting. Living off their fat reserves until their return to the Southern Ocean for a summer Krill feast. As we watch, the largest whale lifts its tail clear of the water and slaps it back down onto the surface.  A collective “Oh” exhales across the ship. A moment of deep communion between these awe-inspiring animals and a pod of humans. Is this what the ancients meant by the grace of god? 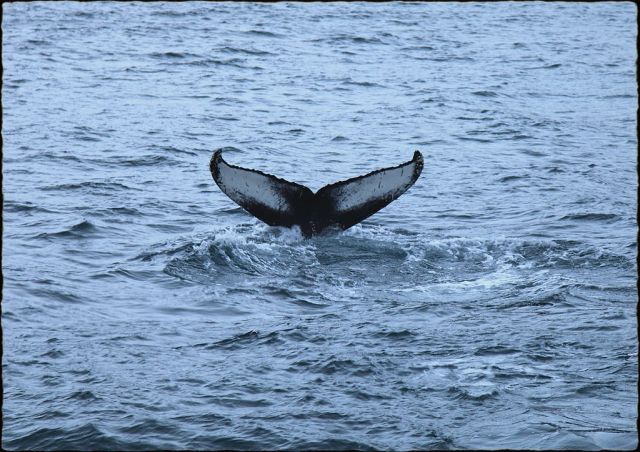 Paul is beside me now. Together we watch the whales merge with the waves as the ship sails on.  And then it’s time for lunch. But as I turn away, a low bellow echoes across the water. The lunch bell? A siren? A whale song.

Later we stand at the railing until the sun slips over the earth’s edge.  As the remaining light seeps slowly away, and dusk deepens into twilight, I spot Venus, the evening star. Just risen, it hangs low in the early night sky. I think about my new Cetacean friends, swimming through the dark waters, and wonder how our species can bear to pollute these oceans. How can we stand by as the ice caps melt and the Krill disappear? 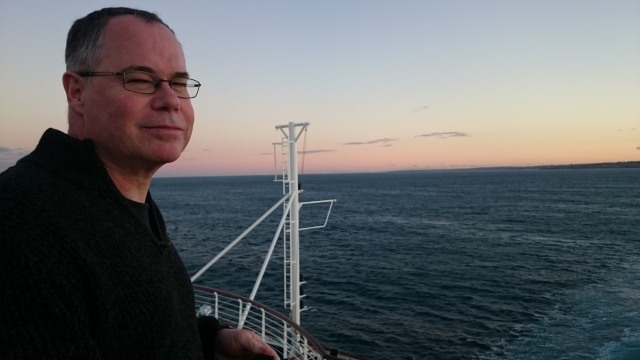 Back on shore a few days later, I’m waiting for my takeaway coffee. The ground seems to sway slightly and I’m back on the boat, reliving that soul stopping moment watching the whales. Then my name is called; I grab my latte, my mind already in the office, as the baleen dream dips away over the horizon behind me.

Daniela is a writer, theatre producer and civic educator. She has had short stories and poetry published in: 'Prayers of a Secular World', Inkerman & Blunt; 'Blue Crow Magazine', Blue Crow Press; 'Knitting and other stories', Margaret River Press and Radio National’s '360 documentaries'. Her debut play, 'Talc', was produced in 2010. Her short play, 'Sicilian Biscotti', was produced for the launch of “Women Power and Culture” at New Theatre in 2011 and shortlisted for the Lane Cove Literary Award in 2015. Her second full length play, 'Friday', was produced by SITCO at the Old Fitzroy Theatre in 2013. 'The Poor Kitchen' was produced in 2016 as part of the Old 505 Theatre’s Fresh Works Season and was published by the Australian Script Centre in 2017 (https://australianplays.org/script/ASC-1836). It was re-staged by Patina Productions at Limelight on Oxford in 2019. She co-wrote 'Shut Up And Drive' with Paul Gilchrist and it was produced at KXT in 2016. 'Seed Bomb' was produced at Old 505 Theatre as part of the FreshWorks Season in 2019 and has been published by the Australian Script Centre (https://australianplays.org/script/ASC-2166). She co-wrote 'Softly Surely' with Paul Gilchrist and it was produced at Flight Path Theatre in 2022. She is the co-founder of indie theatre company subtlenuance (www.subtlenuance.com) Her published short stories can be read via the Short Stories tab on this blog.
View all posts by sagesomethymes →
This entry was posted in climate change, Habitat, The Animal Kingdom and tagged 3 day cruise, cruise ship, cruising holiday, Humpback whales, P&O Food and Wine Cruise, Pina Colada, Strawberry Daiquiri, sunset, Sydney Harbour, whales, winter cruise. Bookmark the permalink.

2 Responses to Whales to Starboard