Posted on January 15, 2020 by sagesomethymes

I was startled by a loud thump, thump, thump. A sound halfway between familiar and threatening. It seemed to be coming from the coastal heath land behind us.

We were sitting beside the river at Princetown, a tiny hamlet next to a wide estuary, admiring the rich surrounding wetlands and the green hills in the distance. We’d pulled in at this idyllic spot on the Great Ocean Road in Victoria after spending the day gazing in awe at the Twelve Apostles. There are actually now only eight of these giant limestone stacks left. They were formed by the Southern Ocean pounding the coastal cliffs over thousands of years. Before heading back across the Otway Ranges to our accommodation in the beautiful seaside village of Apollo Bay, we’d decided to stop and have a picnic dinner. That’s when we had our first encounter.

Turning around I saw a very large roo standing at the edge of the bush path that led over the hill to the beach. He was very close to us. I could see the sharp claws on the ends of his paws. And he was very tall. Perhaps that’s why their Latin name is Macropus giganteus.  I looked at him warily. He looked at me with utter disdain. Then he hopped right past us and onto the one lane wooden bridge that spanned the river. It’s a very long bridge so we watched him jump gracefully along until he disappeared into the caravan park on the other side.

Just as we began to eat again, a second roo, smaller than the first, and not giving us a second glance, hopped out from the same path, straight onto the bridge. It’s long grey stride also disappearing towards the camp ground in the distance. Of course we should have expected to see another one as they usually hang around in mobs, sometimes of ten or more. It also seems that they hang around caravan parks, rocking up for the nightly ritual of a feed from the tourists. Briefly I wondered if I should try my luck hopping over the bridge for a bit of BBQ sausage or steak rather than continue with the cheese and tomato sandwiches I’d packed. Perhaps I’m not as cute as these furry marsupials but surely my one footed version of their springy leap would be worth rewarding, for comic aptitude if nothing else. 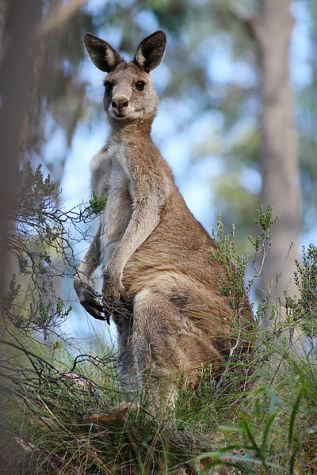 As I was contemplating my chances I heard the thump, thump, thump, again. Then another roo, even bigger than the first, popped out of the bushes. It stopped short when it saw us. I’m not sure which one of us looked more fearful. And then it quickly disappeared back into the thick brush. A minute later it flew out from the bushes a little further along, directly onto the road, and to the bridge, where it stopped short once again, looking both ways in a panic. Was this the first time it had been here? Couldn’t it see the camp ground? Or smell the sizzling sausages? Perhaps I should go and get some freshly barbecued meat for it…. Then before I could do anything it hopped back in the direction it had come, heading straight towards the Great Ocean Road.

Now it was our turn to panic. A roo that size bouncing onto one of the busiest tourist drives in Australia could be catastrophic. Should we run after it? Perhaps get in the car and chase it down before it reached the road? Or at least climb the hill and wave madly at the oncoming traffic? As we stood there trying to decide on a course of action we suddenly saw the roo coming back  down the road. As it neared us we realised that it was being followed by a car, inching along slowly behind the roo with its headlights on. We watched as the distraught creature crossed the long wooden bridge and then just as it got close to the other side it panicked again. Another car was waiting patiently to cross at the other end, and our poor roo must have felt trapped because as soon as it was off the bridge it made a wild side dash, hopping frantically away along the river bank.

By now the sun had set, and lovely as the dusk was, we knew we had a long drive ahead through heavily forested mountains. We packed up our picnic and left this picturesque place at the mouth of the Gellibrand river and got back onto the Great Ocean Road.  It was  about twenty minutes later, as my partner was driving very carefully along the narrow, winding road that we had our second encounter. Rounding a bend, illuminated suddenly by our high beams, was an animal I’d never seen up close in the wild before. There on the road right in front of us was a full grown koala calmly waddling along in the middle of our lane. My partner slammed on the breaks and we came to a sudden stop. Thank goodness that the car behind us had had the sense to keep a safe distance between us.

Looking through the windscreen it seemed that the koala had not even noticed that we were there. It continued to nonchalantly go about its business despite the fact that it had just been in imminent danger of being squashed. But what was its business in the middle of the road I wondered? Why wasn’t it in a tree eating gum leaves? And why did it look like it was hypnotised? Perhaps it was bamboozled by the intensity of light shining onto the road as the car behind us had also pulled up. Maybe it was just hungry and confused? For the second time that evening we were trying to second guess the thoughts of a cute marsupial. Should one of us get out of the car and move the animal off the road? Should we call WIRES? Should we just drive around it? Just as I reached for the door handle determined to act, the koala began to meander back to the side of the road. A few minutes later, with several cars now stopped behind us, we drove away after the animal had moved out of sight. It was a sad irony that we’d been hearing about koalas and other Australian wildlife being caught in the horrific bush fires that were ravaging the east coast and yet here on the relatively fire free southern coast of Australia we’d also encountered a koala in mortal danger.

Fortunately the only other wild life we spotted on the remainder of our holiday was a distant emu far off in a pale yellow field as we neared the Riverina town of Narrandera. By then we’d left the coast and the deep chill of the Southern Ocean and were making our way back to Sydney via an inland route to avoid the fires and road closures along central and western Victoria and southern NSW. We’d spent the night before in Jerilderie, a town which apparently produces a quarter of Australia’s tomatoes. It’s also well known as the place where Ned Kelly and his gang held up the local bank.

That day we drove over 600 kilometres with the temperature reaching a record breaking 46 degrees as we made our way through the still pretty but drought ravaged towns of Coolamon, Murrumburrah, Temora and Young to Cowra. By late afternoon we reached Bathurst and stopped for a break and to assess the viability of crossing the mountains to get to Sydney that night. The reports on the radio had warned that the predicted southerly change would bring high speed winds that could aggravate the fires in the Grose Valley and on the outskirts of Sydney, possibly closing the Great Western Highway. We knew we weren’t the only ones on the road trying to get back home that day. The Princess Highway, south of Sydney had been reopened and thousands of people were leaving the South Coast and there were also fires burning out of control in the Southern Highlands which is why we’d deliberately avoided the Hume Highway. A news update told us that although it was safe to cross the mountains Penrith had reached a staggering 48.9 degrees Celsius, making it the hottest place in Australia and in fact on Earth. We were stunned. It was hard to believe that the tremendous heat we’d experienced in country NSW that day was eclipsed by the temperature in a suburb of Sydney. In a somber mood we made our way up the mountain to Katoomba where we stopped for a meal.

As we drove down the mountain after dinner we counted fire truck after fire truck steadily making their way home. We  guessed that they’d spent the day fighting fires that had broken out on the outskirts of Sydney and also controlling the massive fire to the north that still burned wildly. Driving through Penrith at about 8pm the thermometer on the dashboard recorded 38 degrees; a temperature that we would have balked at in the past but that we were now almost grateful for. The rest of the drive along the M4 into the city was very quiet. I never thought I’d miss the Saturday night hoons, with their max exhausts and thumping music, racing each other into the city at death speeds. But they would have been a harbinger of normality. Instead we returned from our travels to a ghostly city, wreathed in smoke, and traumatised by this strange and dangerous summer.

Image Attributions: Unfortunately only one of the photos is my own as I was too gob smacked by both the scenery and the wildlife encountered on this trip to snap anything decent. I’m grateful to Wikimedia Commons and these authors for allowing me to share their work.

Daniela is a writer, theatre producer and civic educator. She has had poetry and short stories published in 'Prayers of a Secular World', Inkerman & Blunt; 'Blue Crow Magazine', Blue Crow Press; 'Knitting and other stories', Margaret River Press and Radio National’s '360 documentaries'. Her debut play, 'Talc', was produced in 2010. Her short play, 'Sicilian Biscotti', was produced for the launch of “Women Power and Culture” at New Theatre in 2011 and shortlisted for the Lane Cove Literary Award in 2015. Her second full length play, 'Friday', was produced by SITCO at the Old Fitzroy Theatre in 2013. 'The Poor Kitchen' was produced in 2016 as part of the Old 505 Theatre’s Fresh Works Season and was published by the Australian Script Centre in 2017 (https://australianplays.org/script/ASC-1836). It was re-staged by Patina Productions at Limelight on Oxford in 2019. She co-wrote 'Shut Up And Drive' with Paul Gilchrist and it was produced at KXT in 2016. 'Seed Bomb' was produced at Old 505 Theatre as part of the FreshWorks Season in 2019 and has been published by the Australian Script Centre (https://australianplays.org/script/ASC-2166). She is the co-founder of indie theatre company subtlenuance (www.subtlenuance.com) Her published short stories can be read via the Short Stories tab on this blog.
View all posts by sagesomethymes →
This entry was posted in climate change, Habitat, The Animal Kingdom and tagged Apollo Bay, Bathurst, bush fires, Coolamon, Cowra, eastern grey kangaroo, Great Ocean Road, jerilderie, Katoomba, koala, Macropus giganteus, Murrumburrah, Narrandera, Otway Range, Penrith 48.9 degrees Celsius, Riverina, Temora, Twelve Apostles, wildlife, Young. Bookmark the permalink.