Posted on January 25, 2013 by sagesomethymes

On the circuit road to Omeo sits the alpine village of Dinner Plain. To get there you start in the pretty little town of Harrietville, at the very foot of the Victorian Alps, and drive along the Great Alpine Road until you are 1861 metres above sea level.  You will have wound your way through leafy forests of gum and round endless hairpin bends until you emerge above the tree line, surprised at the spurs of these giant mountains carpeted with alpine daisies.

And perched on the very highest precipice sits the serene ski village of Mt Hotham. But it is pretty little Dinner Plain that takes my fancy, 12km further on this high mountain road. Modern blue and grey wooden chalets surrounded by fields of snow grass and ghostly snowgums. Or the remains of snowgums, their green forever extinguished by the viscious bushfire season of 2003. 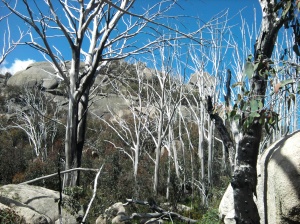 In summer, the temperature here sits at a cool 18 degrees celsius. We spent the afternoon walking the old horse trails to the edge of escarpments with awesome views of endless peaks and ridges; an immense chain of mountains stretching along the south east of an otherwise almost flat continent.

So after walking ourselves stupid in the thin high mountain air we descended back to Harrietville for dinner. At a big friendly pub we filled ourselves with pizza and beer, then walked back to our motel through the long, late twilight; a full moon rising over the closest ridge, and the quiet, fresh smell of night in the country accompanying us.

That was three weeks ago. And tonight I watch the news after a day at work. I live in the largest city on this dry continent. It sits at the edge of a very deep harbour and is cooled by ocean breezes, usually. But in the last two weeks we have had record breaking temperatures across the country, and here in Sydney a scorching 45.8 degrees last Friday. But we haven’t had fires, only this wild foreboding of what is to come.

Just about everywhere else has begun the New Year with fire. The February Dragon has alighted in January and in Tasmania, South Australia, Victoria and the rest of NSW the army of volunteers that make up the Rural Fire Service, are exhausted. But still the flames flare. And tonight as I watch the news, it is pretty little Harrietville that is being evacuated, and Dinner Plain that is on high alert. And I remember those ghostly galleries of ash barked gums, sentinels to the destructive force of nature at its fiercest. 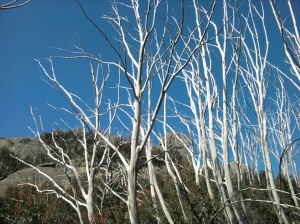 Daniela is a writer, theatre producer and civic educator. She has had poetry and short stories published in 'Prayers of a Secular World', Inkerman & Blunt; 'Blue Crow Magazine', Blue Crow Press; 'Knitting and other stories', Margaret River Press and Radio National’s '360 documentaries'. Her debut play, 'Talc', was produced in 2010. Her short play, 'Sicilian Biscotti', was produced for the launch of “Women Power and Culture” at New Theatre in 2011 and shortlisted for the Lane Cove Literary Award in 2015. Her second full length play, 'Friday', was produced by SITCO at the Old Fitzroy Theatre in 2013. 'The Poor Kitchen' was produced in 2016 as part of the Old 505 Theatre’s Fresh Works Season and was published by the Australian Script Centre in 2017 (https://australianplays.org/script/ASC-1836). It was re-staged by Patina Productions at Limelight on Oxford in 2019. She co-wrote 'Shut Up And Drive' with Paul Gilchrist and it was produced at KXT in 2016. 'Seed Bomb' was produced at Old 505 Theatre as part of the FreshWorks Season in 2019 and has been published by the Australian Script Centre (https://australianplays.org/script/ASC-2166). She is the co-founder of indie theatre company subtlenuance (www.subtlenuance.com) Her published short stories can be read via the Short Stories tab on this blog.
View all posts by sagesomethymes →
This entry was posted in Habitat and tagged bushfire, bushland, Dinner Plain, driving tour, february Dragon, forest, Harrietville, holiday, South East Australia, Victorian Alps, walking. Bookmark the permalink.