Crying in the Cathedral

In Australia, left leaning, liberal thinking, chardonnay sipping, bleeding hearts types are living through hopeless times. It seems there is very little we can do except wait for the next election.

At least there is a next election.

I was reading recently about the English Civil War. That bloody time in English History when Parliament went to War against the King. The King lost. Parliament won. And so we have a system of government where one person doesn’t have the arbitrary power to make all the decisions. (Although you would be forgiven in thinking we’d slid back to those times when reading about the Federal Government’s new laws which would allow the Minister to strip dual nationals accused of terrorism activities of their Australian Citizenship without any need for the courts to decide if they are guilty first.) 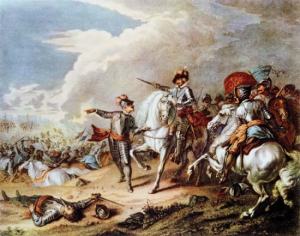 In explaining why that society dissolved into warfare the writer said, “Where there is no common ground there is only the battle ground.” Democracy (our parliamentary and legal institutions, our rights and responsibilities, such as voting), is the common ground where we must fight out our ideas and convince the majority to come to our side. It is not enough to wait for the next election, hoping that things will change, we have to prepare the ground and sew the seeds for a better harvest than the last one.

But how to do that?

John Lennon once said, “If everyone demanded world peace instead of a new TV, we’d have peace.”

Perhaps this is why I cried in the cathedral.

I am not a practicing catholic, but it is the spiritual tradition I have inherited. I love the meditative peace and beauty of St Mary’s Cathedral and I wanted to light some candles for a sick friend in hospital. And I wanted to thank God for the new pope who had just announced his encyclical about climate change. 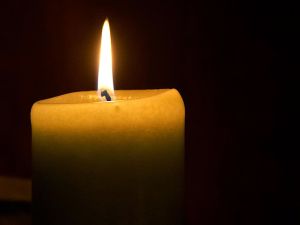 I don’t believe in miracles but sometimes they happen.

As I knelt praying I felt myself cracking. All of the walls that I had erected, walls of words and ideas, held together with a solid mortar of apathy and defensiveness, crumbled; leaving my soul suddenly exposed. At least I had one. When you’re constantly walking past people begging for money and ignoring them it can become hard to believe you’re still human.

It was like being defrosted by a soft electric current. I cried. I felt. I woke up. And the result was that when I returned home, and to all of the emails asking me to sign petitions, write to MPs, donate money, I was able to read them and choose what to do calmly and with a warm heart. I no longer felt useless and despairing. I felt recharged. I had the clarity that comes only after a good session of meditation on a candle.

And so this morning, in the same spirit of meditation, I made soup. 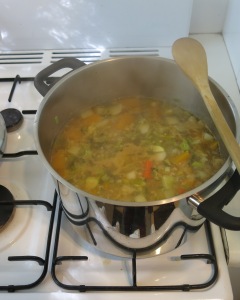 As I was stirring the shallots in a little olive oil, softening the first of the vegetables, I had a memory of my father at the stove, cooking us brunch on a Sunday.  He would make scrambled eggs with shallots on slices of toasted Italian ciabatta. Such a simple meal, the shallots sliced thinly and heated in the pan with some olive oil, then the eggs cracked in and stirred until they were just cooked.

One of the reasons I live such a blessed life is because of my father. He insisted that his daughters go to university, get good jobs and be independent. He’d migrated across the seas, leaving his family behind in order to earn money to keep them all out of Italy’s post war poverty. There is a simple courage in doing what needs to be done, in maintaining the hope alive that the future can be a better one.

Our world seems so complex that it can be a temptation to retreat to a place of quiet ignorance. Sometimes as I watch us ignore some of our seemingly intractable political issues I feel like I’m back in middle ages when peasants would pray for a benevolent monarch to make all the decisions for them. Yet we have so much more power than those faraway peasants sitting helplessly around their medieval hearths. We cannot behave like lambs when we are lions. We need to feed and nurture ourselves and then boldly step into the fray.

So I began with lunch. I took some of the shallots out of the soup pot and put them in a pan. Then once the soup was simmering, I made some toast and cracked two eggs into the pan.  Within minutes I was eating a meal straight out of my childhood.

Perhaps it is the same spirit of hope and pragmatism that keeps us feeding ourselves and our loved ones that can also help us do what needs to be done before the next election.

Daniela is a writer, theatre producer and civic educator. She has had short stories and poetry published in: 'Prayers of a Secular World', Inkerman & Blunt; 'Blue Crow Magazine', Blue Crow Press; 'Knitting and other stories', Margaret River Press and Radio National’s '360 documentaries'. Her debut play, 'Talc', was produced in 2010. Her short play, 'Sicilian Biscotti', was produced for the launch of “Women Power and Culture” at New Theatre in 2011 and shortlisted for the Lane Cove Literary Award in 2015. Her second full length play, 'Friday', was produced by SITCO at the Old Fitzroy Theatre in 2013. 'The Poor Kitchen' was produced in 2016 as part of the Old 505 Theatre’s Fresh Works Season and was published by the Australian Script Centre in 2017 (https://australianplays.org/script/ASC-1836). It was re-staged by Patina Productions at Limelight on Oxford in 2019. She co-wrote 'Shut Up And Drive' with Paul Gilchrist and it was produced at KXT in 2016. 'Seed Bomb' was produced at Old 505 Theatre as part of the FreshWorks Season in 2019 and has been published by the Australian Script Centre (https://australianplays.org/script/ASC-2166). She co-wrote 'Softly Surely' with Paul Gilchrist and it was produced at Flight Path Theatre in 2022. She is the co-founder of indie theatre company subtlenuance (www.subtlenuance.com) Her published short stories can be read via the Short Stories tab on this blog.
View all posts by sagesomethymes →
This entry was posted in climate change, Experiments with Food and tagged candles, citizenship laws, climate change, democracy, elections, English Civil War, Federal Government, hope, legal system, meditation, Minister, Parliament, pragmatism, prayer, scrambled eggs, soul, soup, St Mary's Cathedral, The Pope's encyclical on Climate Change, voting. Bookmark the permalink.

6 Responses to Crying in the Cathedral