Posted on April 6, 2017 by sagesomethymes

“We’re going to stick it where the sun don’t shine.”

That’s not actually what he said.

It’s just what I imagined he was thinking. I blame such crassness on several days of ‘low residue white food’ diet followed by 24 hours of fasting. Although it felt like the Ancient Egyptian process of preserving a dead person’s viscera in canopic jars for the after life, it was just the preparation instructions for a modern colonoscopy. 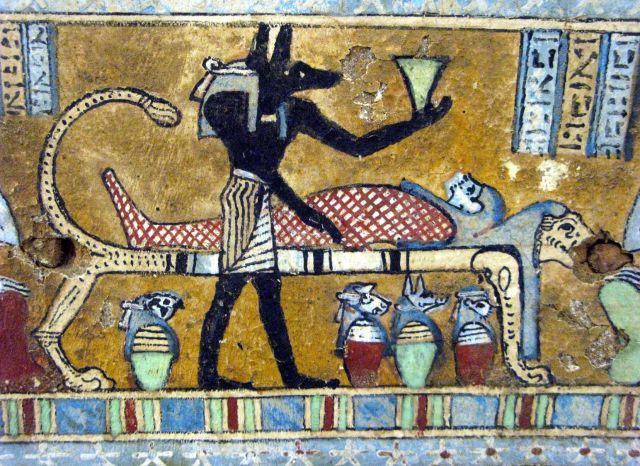 What the doctor said was, “Haven’t seen you for a while. Hope you’ve been well?”

It had been six years in fact. Same place. Same time. Same position.

“Anyone else in the family had bowel cancer recently?”

I must have looked stunned at his question as I shook my head.

“That is why you’re here. Family history,” he said defensively. Almost in reprimand.  Almost as if my family being alive and healthy was  clear evidence that I’d just wanted a day off work.

“Right. We’ll get started. I’ll speak to you on the other side.”

Had he noticed as he spoke to me that I was holding a pair of undies, complete with sanitary napkin? If he had, he’d probably put it down to the usual strange behaviour of patients.

A new nurse asked me to turn on my side. “No towards me, towards me.” I didn’t bother explaining that I’d been trying to stuff my undies under my pillow.  As she took my  blood pressure I thought of the other nurses. They’d been extremely jolly. Bantering above my head as they whizzed my trolley down the long white corridor to the theatre. One of them was the same nurse that had taken me to the cubicle.

“Take off all your clothes and put them in this plastic bag,” she’d instructed. “Put on this white gown, open at the back. Please hurry as Dr Williams is ready for you.”

I managed to take hold of the door as she pulled it shut.

“Just take your undies off at the last minute,” she called out as she walked away.

A ward full of patients and medical staff stared at me. I wanted to crawl somewhere where the sun didn’t shine. It felt like the very first day that I’d got my period when I was thirteen. That had been a Sunday morning. I’d told my mother just before we left for lunch with the extended family at my Uncle’s house. She’d hugged me and given me one of her menstruation pads. When we arrived she’d called everyone into the kitchen.

“Today is a day for celebration! Daniela is a woman!” she’d announced.

I can still feel the heat of the blush that spread across my face all those years ago.

“That is wonderful news!” my Aunt had said as she gathered me in a huge embrace. There were wolf whistles and clapping from my cousins.  My uncle had opened a bottle of spumante and my father had made a toast. No one had thought it was strange. No one had   been embarrassed. It had been like an ancient ritual of rebirth.  And I had just wanted to die.

For someone on the lookout there are plenty of opportunities to think about death. And lying on a hospital gurney being administered oxygen in preparation for a sedative that will take you into the underworld of consciousness is certainly one of them. The last few weeks had been wet and windy. Glimpses of sunshine few. Conversation all about the weather. I’d begun to wonder if we were becoming London or Melbourne. I’d started to realize how much of my mood is affected by the light outside. And so as I slipped away I did wonder if I would ever see the sunshine again. I did pray that….

I have no way of knowing what actually happened next. It would be nice if they recorded the examination, burnt it onto a DVD and sent it home with us in a little show bag. After the procedure you do get a show bag of sorts. Or at least, its would-be contents are waiting on the tray, on the table next to your bed in the recovery room. There is an interim report with discharge instructions. And there is your first meal: a see through plastic pack containing a cheese sandwich on buttered white bread; a small plastic tub of green jelly; a styrofoam cup of tea with two sugars; and a Freddo Frog.

Just as I was about to tuck into this feast I remembered my undies. I felt about under my pillow and was delighted to find that they were still there. I pulled them out and wriggled around for a few minutes under the blankets struggling to get them back on. When finally I resurfaced I was ready to eat.

That was when I noticed Dr Williams standing by my bedside.

“Ah you’re back from the dreamless in between.”

That’s not actually what he said. Just what my still drugged brain heard.

“You’ll be happy to know everything is clear. No problems at all. In fact you’ve got the pinkest guts I’ve seen in a long time,” was actually what he said.  “We’ll see you in five years time. But don’t forget, no operating heavy machinery, no driving, and no signing legal documents for the next twenty four hours.”

Nothing about sharing the experience on my blog.

Before I had a chance to thank him he’d rushed off to his next patient, or a game of golf. I hadn’t been able to say all of the things you want to say to someone who has taken you from a state of fear and worry to a whole new lease of life. Instead I turned towards the windows to hide my tears. What I saw outside was a stunning sapphire blue Sydney sky. And the sun. It was shining.  Everywhere.

Daniela is a writer, theatre producer and civic educator. She has had poetry and short stories published in 'Prayers of a Secular World', Inkerman & Blunt; 'Blue Crow Magazine', Blue Crow Press; 'Knitting and other stories', Margaret River Press and Radio National’s '360 documentaries'. Her debut play, 'Talc', was produced in 2010. Her short play, 'Sicilian Biscotti', was produced for the launch of “Women Power and Culture” at New Theatre in 2011 and shortlisted for the Lane Cove Literary Award in 2015. Her second full length play, 'Friday', was produced by SITCO at the Old Fitzroy Theatre in 2013. 'The Poor Kitchen' was produced in 2016 as part of the Old 505 Theatre’s Fresh Works Season and was published by the Australian Script Centre in 2017 (https://australianplays.org/script/ASC-1836). It was re-staged by Patina Productions at Limelight on Oxford in 2019. She co-wrote 'Shut Up And Drive' with Paul Gilchrist and it was produced at KXT in 2016. 'Seed Bomb' was produced at Old 505 Theatre as part of the FreshWorks Season in 2019 and has been published by the Australian Script Centre (https://australianplays.org/script/ASC-2166). She is the co-founder of indie theatre company subtlenuance (www.subtlenuance.com) Her published short stories can be read via the Short Stories tab on this blog.
View all posts by sagesomethymes →
This entry was posted in My Mother and Me, The Sex Diaries, Time and tagged bowel cancer, Canopic jars, colonoscopy, death, guts, hospital, intestines, medical procedures, menstruation, nurses, periods, show bag, sunshine, viscera. Bookmark the permalink.