Two Weeks In A Night Club

Recently I spent some time in “Sydney’s #1 Nightclub”.  The home of Latin Soul on Mondays; Sydney’s Biggest Techno Party on Tuesdays; the Mid-Week Rave on Wednesdays; Hip Hop on Thursdays; Local Acts on Fridays; and the sickest House on Saturdays.

“That must be the World Bar in Potts Point,” I hear you say. 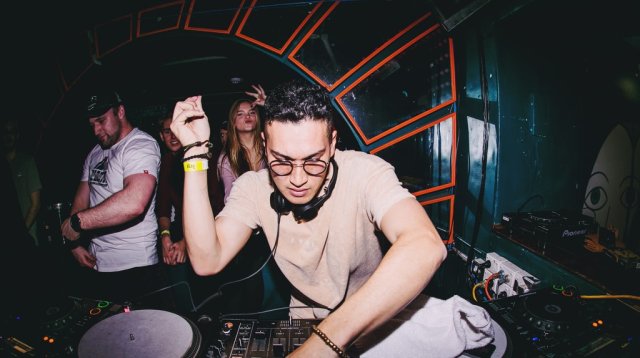 But I was there for the theatre.

“Theatre? What kind of music is that?” I overheard one cool young thing ask the barman while he poured her cocktail into a tea pot.

If I had you fooled there, especially if you were wondering why the words cocktail and teapot were in the same sentence, you’re showing your age. No cool young thing would be caught dead in a night club before 10pm. And bartenders (along with barristas, barristers, bakers, butchers and anybody else who idly asks you what you do for  a living) usually just look at you blankly when you say the word theatre. Try it.

We were staging a play in the World Bar’s Blood Moon Theatre at 7pm while the cool young things were preloading elsewhere (or perhaps just eating dinner at home with mum and dad).

Each night after our show we packed away our entire set as the chillin DJ’s for that night’s awesome gig swarmed around us, taking charge of the light and sound system, and our stage. Which is how I realised it was the dance floor. At this point dear reader, you’d be forgiven for muttering to yourself, “It’s not really a theatre then is it?”

But this old band room was much cooler than your average theatre; an ‘activated’ space to use the current lingo.  And I was uber excited. We were making edgy, ‘pop-up’ theatre; one of the coolest art forms, in the neatest venue in town. The World Bar, in case you’re not aware, is a wicked place to party. Don’t believe me? Just ask the hundreds of patrons eagerly pushing to get in through the security cordon at 10:30 pm each night; as I was pushing, just as eagerly, to get out. But on our last night I found myself in the line with the hip party people. 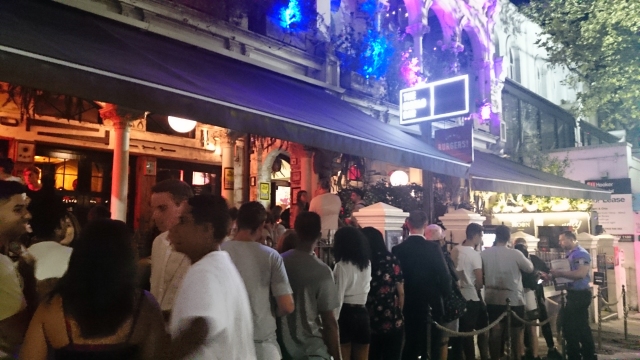 The cast and crew had decided to stay around after the show for some celebratory drinks. Waving at the actors to save me a seat I’d made my way out onto the street thinking to deposit the set and props in the car I’d hired for bump out. It was parked just around the corner so within minutes I was back and ready for a drink at our after party. But I didn’t realise that after 10pm the security guards wouldn’t just let me walk back in. After all they knew me. I was the woman that danced a strange tango with them each night while yelling, “I’m with the theatre! Let me out!” But tonight as I approached the entrance the guard just looked at me blankly and told me to go to the end of the line. I backed away feeling deeply rejected; wondering what had changed in our relationship.

But as I stood in line I began to get excited again. I haven’t lined up to get into a night club for a few decades. Three to be exact. I admit I felt a little out of place; had I known I’d be clubbing I would have worn my sequined disco shorts and gangsta heels. Slowly the line edged forward and finally I was back at the front. The guard held his hand up and demanded my ID. I was flattered. Did he seriously think I looked under 18? Perhaps he just wasn’t wearing his glasses?

As if reading my mind he said, “It’s the law Lady.”

Suddenly I ‘got’ all the fuss about the lockout laws.

I dug around in my hand bag and a few minutes later I found my wallet. I handed him my driver’s license. Then I realised that he was waiting for me to stand in front of a huge machine with multiple screens.

From behind me came an impatient chorus, “Look at the camera!”

I looked and blinded by a flash, blinked, then opened my eyes to see a giant image of myself, eyes closed, on the screen.

This time my eyes were open and so was my mouth. But that seemed to satisfy him.

Before I could ask, he said, “It’s the law Lady. We keep it on file so we can ban you if you cause trouble.”

I made ready to finally enter the venue. But just as I pushed past that security guard another one appeared and asked me to open my handbag. He was going to search my bag? Was I entering another country? That’s when it suddenly dawned on me why all those young women lined up outside carried only tiny little purses that hung from their shoulders from the thinnest of straps. Perhaps this was also why they wore only the tiniest of dresses that also hung from their shoulders from the thinnest of straps. But they’d had the luxury of going home after work (or school) to change. I was still in my work place.

I opened my bag.  The security guard stared at the contents. Obviously not what he was expecting. No lipstick, mascara wand or compact, sorry I keep them in my clubbing bag. All I’ve got here is a script, note book, torch, scissors, clip board, bull clips, phone, camera, ticket stubs, cash box, water bottle, Blu Tack, Gaff tape. I asked him if he was looking for anything in particular.

“Alcohol,” he said. “You can’t take alcohol into a licensed venue.”

But then he pointed at my water bottle.

“But it’s my water bottle.”

“You can pick it up on your way out.”

As I headed to the table where my drink and my friends waited I heard the security guard call out after me, “And don’t forget there’s a lock out at 1:30am Lady. If you leave after that we won’t be able to let you back in.”

I was pretty sure that by that time the only venue I’d be in was my bed.

Daniela is a writer, theatre producer and civic educator. She has had poetry and short stories published in 'Prayers of a Secular World', Inkerman & Blunt; 'Blue Crow Magazine', Blue Crow Press; 'Knitting and other stories', Margaret River Press and Radio National’s '360 documentaries'. Her debut play, 'Talc', was produced in 2010. Her short play, 'Sicilian Biscotti', was produced for the launch of “Women Power and Culture” at New Theatre in 2011 and shortlisted for the Lane Cove Literary Award in 2015. Her second full length play, 'Friday', was produced by SITCO at the Old Fitzroy Theatre in 2013. 'The Poor Kitchen' was produced in 2016 as part of the Old 505 Theatre’s Fresh Works Season and was published by the Australian Script Centre in 2017 (https://australianplays.org/script/ASC-1836). It was re-staged by Patina Productions at Limelight on Oxford in 2019. She co-wrote 'Shut Up And Drive' with Paul Gilchrist and it was produced at KXT in 2016. 'Seed Bomb' was produced at Old 505 Theatre as part of the FreshWorks Season in 2019 and has been published by the Australian Script Centre (https://australianplays.org/script/ASC-2166). She is the co-founder of indie theatre company subtlenuance (www.subtlenuance.com) Her published short stories can be read via the Short Stories tab on this blog.
View all posts by sagesomethymes →
This entry was posted in Spirit of Place, Theatre and tagged Blood Moon Theatre, The World Bar, Theatre; night club;. Bookmark the permalink.

1 Response to Two Weeks In A Night Club