Burke & Wills and Me

I’m standing at Redfern Station waiting to catch the train to Canley Vale to visit my mother who lives exactly 9.2 km from there along the Orphan School Creek bike track. Usually I catch a bus from the station to her house but today I have my brand new 6 speed Holland Vintage Cruiser with me. Some people have suggested that I’ve purchased a pedal powered bone shaker. That I should have bought an all purpose, all terrain, mountain bike if I was serious about riding in Sydney.  But I pointed out to these naysayers that when I took my new cycling machine to the local park it performed beautifully.  Albeit today’s ride is 18.4 km return, but how much harder can that be than catching the bus?

The train pulls in and I prepare to board the last carriage as recommended by Cycling NSW. Apparently less people use this carriage so it’s easier when travelling with your bike. But as the doors open I realise that other people have already taken this advice. 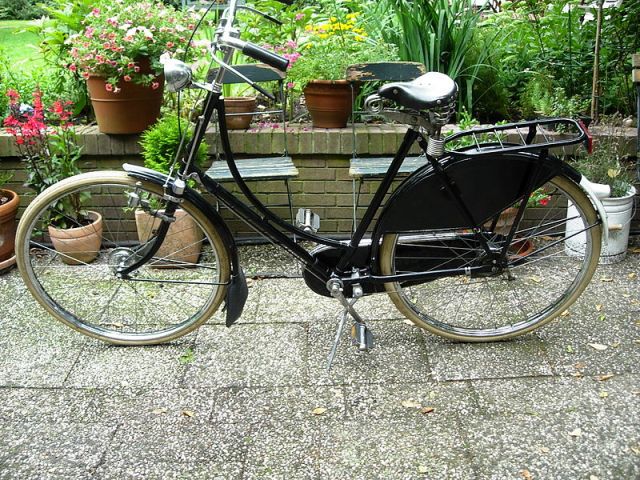 I get in, and with a combination of iron-pumping and power lifting that any gym junkie would be proud of, I push past a classy racer complete with a man in serious riding gear. He’s wearing a tonal blue, stretch polyester elastine, cycling jersey with reflective trim, and those super fitted cycling shoes with clattering outsoles that are meant to drive all your power into the pedals. In my shorts and t-shirt I suddenly feel under dressed. Next to him stands a man with a huge suitcase and a small carry on. He looks like he hasn’t slept for twenty four hours so I suddenly don’t feel so shabby.

I maneuver past them until I’m standing against the opposite glass doors which are the exact length of my bicycle. I’m not even going to think about what to do when they open at the next station. Then just as the guard’s whistle blows and the doors are about to close, an old couple, with a combined age of about 150, drag themselves and two overflowing shopping carts into the carriage. The train moves off, and I smile wryly at the other four souls, each with a ridiculously oversized item, crammed into the smallest part of an otherwise completely empty train. As we leave the station I realise I’ve already learnt Navigating Public Transport With A Bike Lesson #1: Never travel in the final train carriage, especially if it is the one closest to the lift. 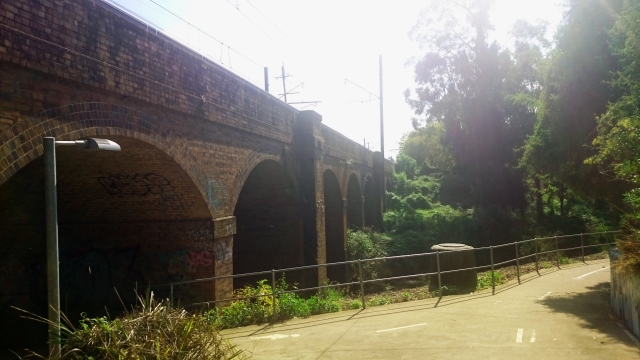 Forty five minutes later we arrive at Canley Vale Station. I get off and so do the old man and woman. I wave goodbye and wheel my bike down the ramp and onto the street. The bike path scoots under the railway line and next to it is the Orphan School Creek, a tidal stream, that apparently rises and falls to the rhythms of the Georges River. This is the same creek that runs behind my mother’s house and the inspiration for today’s adventure.

And I’m off. I’m so excited I feel like I’m on a holiday. I pedal past the station car park, then the empty back yards of the main streets shop fronts, then the local sporting fields; but just as I’m starting to think there’s nothing here but densely developed suburb, I find myself travelling through a green corridor of Swamp Oak. The last vestiges of the Alluvial woodland that once lined the creek. I notice an effort has been made to regenerate the waterway here, with sandstone blocks reinforcing the bank, creating deep pools where a pair of ducks swim and a Shag suns itself on a rock.  In the nearby long grass, which is edged by Forest Red Gums, colonies of Ibis stride and Currawongs and Magpie-larks lurk.  I stop in this idyllic place to drink from my water bottle. I shake a few drops out of it and realise I should have refilled it before leaving home. Nearby a pretty cottage reminds me of the food and comfort that is only a few kilometers away. Thirsty I pedal on.

I cycle under the Cumberland Highway and suddenly emerge next to a narrow concrete channel with yellow grass mowed to the edge of the path and not a tree in sight. It’s like a desert but not as pretty. I’m now riding under the full glare of the morning sun next to a suburban drain. I’ll discover later that this is Australia’s second-warmest April on record, and the eighth driest. And today the temperature will peak at 29 degrees. But for now all I know is that the nearby road is lined with McMansions, there is not a human in sight, and my thigh muscles are screaming. I consider crawling down the steep sides of the canal to search for water but instead I knock down the gears and push on. It would be easier to harvest my own sweat than discover H2O in this desolate wasteland. This must be what Burke and Wills felt like on their return from the Gulf of Carpentaria. They found their camp at Cooper Creek deserted. Their support team had left only nine hours earlier after waiting for them for four months. Knowing that my support team has made lunch, I hope I don’t disappoint her by not arriving either. 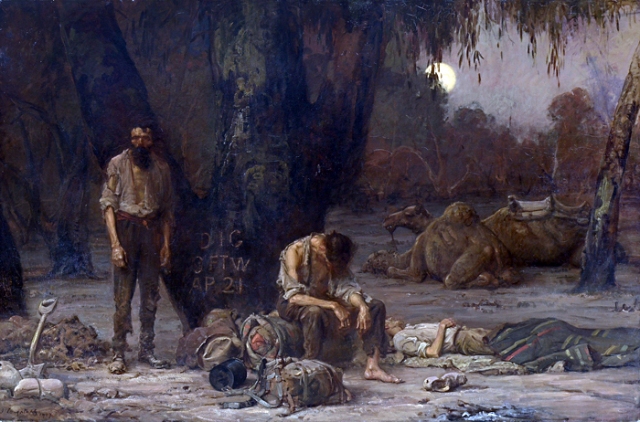 Finally I cross Smithfield Road and find myself behind Fairfield Showground where the path makes its way to St Johns Park. Although there is still no shade it is now a lot prettier. Twenty years ago I taught History at the local high school so I distract myself with memories of innocent young minds thirsty for knowledge.

When I finally arrive at my mother’s house I can’t speak. And I can’t stand either. I lie on the cold Italian tiles for the first time grateful that she tore up that beautiful soft rose shag pile. I close my eyes and wonder if I’m going to have a heart attack. But there are no shooting pains travelling down my arms so I have time to think about my life and if I’ve done anything worthwhile. That doesn’t take long and my heart rate still isn’t back to normal. I can tell because I can’t hear my mother’s shouting even though her face is very close to mine. There is only a red roar in my head. Apparently the longer it takes for your heart rate to return to normal after a bout of exercise the more unfit you are. And apparently you should never just stop riding a bike and get off it, you should slow down, and allow the blood which has concentrated in your legs, to circulate back into the rest of your body.

And then I remember that I’ve completed only half the journey. There are another 9.2 km to ride to get back to the station. So far this adventure on my new push bike has left me internally shattered, my skeleton feels disconnected in a thousand places. If I do survive, it’s doubtful I’ll walk, let alone ride, again. In my panic I haven’t noticed that my mother has left my side. She must be calling an ambulance. It’s worse than I thought.

But then the soft smell of slow cooked bolognese ragu wafts by me and my mother returns.

“I had to stir the sauce,” she says. “I made it this morning. We just have to boil the pasta.”

And that’s when I start to feel better. The roar in my ears subsides and I realise everything will be o.k. I’ll eat lunch. Then I’ll hop back on my trusty town bike for the return journey. Or perhaps I can stay overnight, eat the rest of the pasta for dinner, and my mother can drive me home in the morning. The bicycle can live here. I’ll come back another day and discover the rest of the Orphan School Creek Bike Track. Or maybe I’ll just walk to the Gulf of Carpentaria instead.

Daniela is a writer, theatre producer and civic educator. She has had poetry and short stories published in 'Prayers of a Secular World', Inkerman & Blunt; 'Blue Crow Magazine', Blue Crow Press; 'Knitting and other stories', Margaret River Press and Radio National’s '360 documentaries'. Her debut play, 'Talc', was produced in 2010. Her short play, 'Sicilian Biscotti', was produced for the launch of “Women Power and Culture” at New Theatre in 2011 and shortlisted for the Lane Cove Literary Award in 2015. Her second full length play, 'Friday', was produced by SITCO at the Old Fitzroy Theatre in 2013. 'The Poor Kitchen' was produced in 2016 as part of the Old 505 Theatre’s Fresh Works Season and was published by the Australian Script Centre in 2017 (https://australianplays.org/script/ASC-1836). It was re-staged by Patina Productions at Limelight on Oxford in 2019. She co-wrote 'Shut Up And Drive' with Paul Gilchrist and it was produced at KXT in 2016. In 2019, her new play, 'Seed Bomb' was produced at Old 505 Theatre as part of the FreshWorks Season. She is the co-founder of indie theatre company subtlenuance (www.subtlenuance.com) Her published short stories can be read via the Short Stories tab on this blog.
View all posts by sagesomethymes →
This entry was posted in Habitat, My Mother and Me and tagged Burke and Wills, Canley Vale Station; Spaghetti Bolognese;, cycling; bike riding; taking your bike on a train;, Orphan School Creek; Bike Riding; Cycle NSW; trains;. Bookmark the permalink.

1 Response to Burke & Wills and Me