Posted on January 14, 2019 by sagesomethymes

This fascinating existential question confronted me recently while I was thinking about my mother’s solar panels.

She lives in a suburb where roofs outnumber trees 10:0.  A perfect place to harness the power of the sun. I’d been telling her for a while now that it would be good for both the environment and her hip pocket to install solar panels. Together we’d sit at her kitchen table, eating her delicious Olive Oil, Fennel and Chilli Biscuits, and drinking a glass of her home made wine, as I pointed out that she’d be able to run her air conditioner all day and save money on her electricity bill at the same time. To myself I’d think, “Why doesn’t she just get them?” To her, I’d say, “Why don’t you just get them?” But I’d return on my next visit, and the one after that, and still her roof remained bare of photo-voltaic membranes.

Then one day, during one of these conversations, trying to be extra helpful, I said, “Why don’t you ask someone who’s already got panels on their roof to tell you how they did it?” Frankly I didn’t know why she hadn’t thought of this herself. Well it turns out she had. She told me all about feed in tariffs; and that you have to use all your appliances in the day time, because that’s when you’re using the electricity you generate, but at night, you’re using electricity from the grid, so you pay for it.

“So if you only use electricity in the day time, you’ll never pay an electricity bill again?” I asked.  Although it didn’t make any sense to me, I was quite excited by the idea.

But she explained that it was a little more complicated than that. You could also get a battery she told me. And then you could store your electricity and use it at night.

But batteries are very expensive she said, so that was out.

Although my mother now had a lot of information, she still hadn’t done anything about getting solar panels. Just as I was wondering why, if she really wanted them, she didn’t just get them, she handed me a leaflet. It was one of those ads that gets shoved into your letterbox, the type that most people are too busy to look at, so put straight into the recycling bin.  But my mother, being retired, had not only kept it, but also carefully examined it, and now she wanted me to do the same. It was an ad for solar panels offering a 50% discount on products and installation if you called the number NOW! 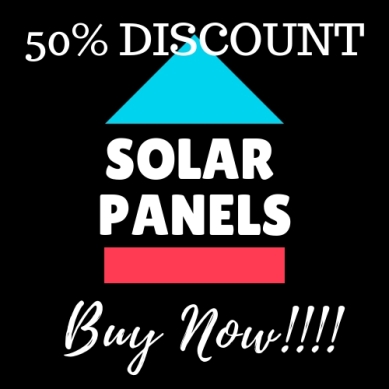 And suddenly I had one of those rare flashes of insight. My mother was actually asking me to install solar panels on her roof. Well, not expecting me to actually get up there and do it myself, but to organise it. I realised that she’d been trying to politely ask me to do this for weeks. And I’d thought we were just sitting around eating biscuits and drinking wine.

“Just ring them and get a quote,” my mother said. Was that a little frustration I detected in her tone? Was she, an Italian migrant for whom English is a second language, wondering why a tertiary educated first language speaker couldn’t make a phone call?

So because I’d disappointed her in so many ways so far in my life, by not getting married, by not giving her grandchildren, to name just two, I decided that this time I would come through for her. I would give her solar panels. Well, she’d still have to pay for them. I’d just organise it for her. There and then I appointed myself her solar panel project manager.

And so I rang the number on the brochure and I wasn’t wrong in naming this a project. Forty five minutes later, I’d inspected the electricity board, taken photos of the roof, checked out my mothers house on satellite maps, got out the compass to work out which way was north, and trawled through her last year’s worth of electricity bills, all so that the sales person on the other end of the phone could generate a quote.

But it felt great to take action.  And so I got straight onto the internet and found two more companies that installed solar panels and rang them for quotes too. They were stunned that I already knew that my mother has single phase electricity and an average pitch to her north facing roof. It didn’t seem to tweak with them that perhaps I’d done this all before.

After three phone calls I was exhausted. Just getting quotes for solar panels had taken all afternoon. This could takeover my whole life! I might never be able to lie on the couch, and just imagine things, again.

But just two years down the track, I’m standing in my mother’s front yard admiring the solar panels on her roof. She’s disappeared inside so I follow her in. I raid her biscuit tin as a reward for doing our bit in the battle against climate change.  Then I lie on the couch in her front room, with the air con blasting, sipping a glass of her home made wine and imagining a world where we achieve net zero carbon emissions by 2030, one roof at a time.  That’s when my mother comes in with a leaflet which she hands to me. It’s an ad for installing a solar battery. It offers a 50% discount if you call the number NOW!

Daniela is a writer, theatre producer and civic educator. She has had short stories and poetry published in: 'Prayers of a Secular World', Inkerman & Blunt; 'Blue Crow Magazine', Blue Crow Press; 'Knitting and other stories', Margaret River Press and Radio National’s '360 documentaries'. Her debut play, 'Talc', was produced in 2010. Her short play, 'Sicilian Biscotti', was produced for the launch of “Women Power and Culture” at New Theatre in 2011 and shortlisted for the Lane Cove Literary Award in 2015. Her second full length play, 'Friday', was produced by SITCO at the Old Fitzroy Theatre in 2013. 'The Poor Kitchen' was produced in 2016 as part of the Old 505 Theatre’s Fresh Works Season and was published by the Australian Script Centre in 2017 (https://australianplays.org/script/ASC-1836). It was re-staged by Patina Productions at Limelight on Oxford in 2019. She co-wrote 'Shut Up And Drive' with Paul Gilchrist and it was produced at KXT in 2016. 'Seed Bomb' was produced at Old 505 Theatre as part of the FreshWorks Season in 2019 and has been published by the Australian Script Centre (https://australianplays.org/script/ASC-2166). She co-wrote 'Softly Surely' with Paul Gilchrist and it was produced at Flight Path Theatre in 2022. She is the co-founder of indie theatre company subtlenuance (www.subtlenuance.com) Her published short stories can be read via the Short Stories tab on this blog.
View all posts by sagesomethymes →
This entry was posted in climate change, Habitat, My Mother and Me and tagged climate change, photovoltaic membrane, procrastination, solar array, solar panels, solar power. Bookmark the permalink.