Posted on October 19, 2016 by sagesomethymes

I like walking. Now. As an adult it has led me through lush woodland and native forest, along rugged cliff tops that overlook the wild blue ocean and into cosmopolitan quarters of our rich city that I didn’t even know existed. Walking takes me out of myself and into a meditative, imaginative place of inspiration and delight. What’s not to like? 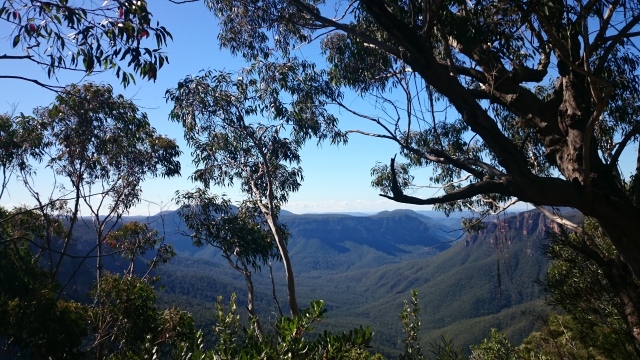 When I was a child however walking was agony. Each day I walked to school, itself a place of torture.  To get there I had to tramp up an enormous hill and whilst climbing this hill I had to scrape my shoes on the concrete footpath. My parents, having grown up in Fascist Italy had been too afraid to ignore the uniform instructions for Year 7 students, despite my protests. So on my first day of high school, I was the only student wearing shiny, black, patent leather school shoes. Everybody else was wearing desert boots. You may wonder why they wore desert boots in Moorebank. Add the word cultural in front of it and it will all make sense. And so every afternoon I walked home by myself, scraping my school shoes for the whole three kilometres, in an attempt to turn them into desert boots.

But now after many years as an adult that childhood horror has faded and I have discovered the satisfaction of walking. I’m not alone in this. The Aboriginal people who first inhabited this land not only walked it but mapped its landmarks in song, story, dance, and art. Aristotle walked as he talked to his students in his academy in downtown Ancient Athens. The medieval pilgrims traversed whole continents to arrive at their sacred places. Before the industrial revolution farmers sometimes walked several hours a day simply to till their fields and then take their goods to market. And nineteenth century philosophers, a more leisured class, walked as a way to rediscover the joy of existence.

Recently I found myself at Railway Square with time to spare and decided to take myself on a little walking adventure into Sydney’s smoke stack past. The Goods Line, an old rail corridor that runs parallel to Harris Street between UTS and the Powerhouse Museum is a wonderful example of re-imagining industrial space for public use.

This was the site of a busy freight rail system that ran from Dulwich Hill to Central Station, via Rozelle and Darling Harbour in the days before cars and trucks when goods were carted  by rail. Much of the line around Darling Harbour has been re-used for the Sydney Light Railway.

At the beginning of the walk you emerge from the darkness of the Devonshire Street tunnel, having crossed under George Street, and into the high, bright light of The Goods Line which then crosses above Ultimo Street, via the oldest iron bridge in Australia, built in 1879. At this end you will find trees and shrubs amongst the remnants of signal boxes and abandoned interlocking rail tracks. There are also table tennis tables and picnic benches, and a children’s water play area with a sand pit shaded by fig trees. It is a peaceful pocket populated by pedestrians and memories of a very different past.

Walking is an urban meditation; a riff through the soul of this made thing we call a city. Both we and it are a work in progress and walking helps us to capture the spirit of these wild new places we find ourselves in.  But be warned encountering such wonder in the ordinary can be quite dangerous for your health. Luckily The Goods Line is only about 500 metres long. You’ll know you’ve come to the end of it when you arrive at the Powerhouse Museum Shop & Café where they will serve you a much needed coffee and you can choose from their lovely selection of pastries. And what better place than a coffee house to ruminate on your next ramble.

Daniela is a writer, theatre producer and civic educator. She has had poetry and short stories published in 'Prayers of a Secular World', Inkerman & Blunt; 'Blue Crow Magazine', Blue Crow Press; 'Knitting and other stories', Margaret River Press and Radio National’s '360 documentaries'. Her debut play, 'Talc', was produced in 2010. Her short play, 'Sicilian Biscotti', was produced for the launch of “Women Power and Culture” at New Theatre in 2011 and shortlisted for the Lane Cove Literary Award in 2015. Her second full length play, 'Friday', was produced by SITCO at the Old Fitzroy Theatre in 2013. 'The Poor Kitchen' was produced in 2016 as part of the Old 505 Theatre’s Fresh Works Season and was published by the Australian Script Centre in 2017 (https://australianplays.org/script/ASC-1836). It was re-staged by Patina Productions at Limelight on Oxford in 2019. She co-wrote 'Shut Up And Drive' with Paul Gilchrist and it was produced at KXT in 2016. 'Seed Bomb' was produced at Old 505 Theatre as part of the FreshWorks Season in 2019 and has been published by the Australian Script Centre (https://australianplays.org/script/ASC-2166). She is the co-founder of indie theatre company subtlenuance (www.subtlenuance.com) Her published short stories can be read via the Short Stories tab on this blog.
View all posts by sagesomethymes →
This entry was posted in Habitat, Spirit of Place and tagged Harris Street, history of Sydney, Powerhouse Museum, psychogeography, public space, Railway Square, Sydney walks, The Goods Line, urban walks, walking, walking Sydney. Bookmark the permalink.